2019.11.15
A research team at NTHU’s Brain Research Center led by Prof. Chiang Ann-shyn, working in conjunction with Chen Bi-chang, an assistant research fellow at Academia Sinica, has recently developed a “transparent lightsheet localization microscope” which provides a clear nanoscale image of a single protein molecule in intact biological tissue, marking a major advance in super-resolution microscopy technology. This new technology is expected to facilitate major advances in the study of tissue physiology and pathology, as well as the mechanisms underlying memory.
Chiang said that microscopic observation is the key to understanding biological phenomena and pathological conditions. The 2014 Nobel Prize in Chemistry was awarded to the three scientists who invented “super-resolved fluorescence microscopy,” which made it possible to observe molecules as small as 30 nanometers, but only in a thin layer of cells. By contrast, the microscope developed by Chiang and Chen provides three-dimensional stereoscopic images of single molecules in large tissues, making it possible to observe for the first time the quantity and spatial distribution in specific cells of proteins produced during the formation of memory.
Prior to joining Academia Sinica, Chen worked as a research assistant with Eric Betzig, who won the 2014 Nobel Prize in Chemistry. The microscope developed by Chiang and Chen provides a transparent image of tissues, making it possible to map out the dopaminergic neural pathways in the brain of a fruit fly, and their groundbreaking research has been published in a recent edition of Nature Communications.
Chu Lian, a postdoctoral researcher at the Brain Research Center, explained that the memory of a fruit fly is related to the vesicular monoamine transporter of the parallel circuits in its brain called mushroom bodies. The research team used their transparent lightsheet localization microscope to observe the distribution of this type of protein in the mushroom body, thereby revealing the mechanisms involved in memory formation. They discovered that in addition to the cell body, memory is also stored in the synapses between the nerve cells.
Chen said that they encountered many problems while attempting to expand Betzig’s two-dimensional cell-imaging technology into a three-dimensional microscope, including the difficulty of evenly distributing the fluorescent dye, and the opaqueness of the fruit fly’s brain.
Yet the interdisciplinary research team found ways for dealing with each of these problems. For example, Chiang’s method for making the brain transparent was effectively applied to the fruit fly brain, and Chen Peilin of Academia Sinica processed the super-resolution images. The lead authors of the research paper were Chu and Lu Chiehhan; the other members of the research team were Yang Shunmin, Liu Yanting, Tsai Yunchi, Wang Wencheng, Chang Weikun, and Ping kuanlin.
Chu said that super-resolution 3D microscopy makes it possible to analyze three-dimensional images of the entire brain of a fruit fly in one day—a significant advance over what is possible using two-dimensional images—and it can also provide detailed information on the amount of protein in any neuron.
Major funding for the team’s research was provided by Academia Sinica’s Research Center for Applied Sciences and its Career Development Award.
Research Center for Applied Sciences director Kuo Shangchih said that his Center is preparing to sign a memorandum with NTHU’s Brain Research Center and College of Life Science for jointly establishing a scholarship for outstanding doctoral students conducting research in basic science.
The team’s research article in Nature Communications can be viewed at: https://www.nature.com/articles/s41467-019-12715-3 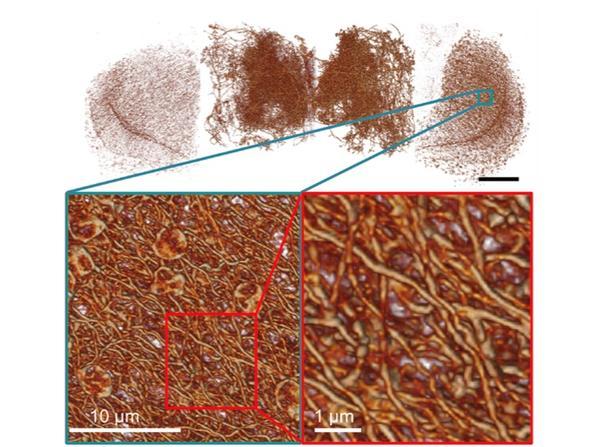 Super-resolution microscopy makes it possible to map out the dopaminergic neural pathways in the brain of a fruit fly. 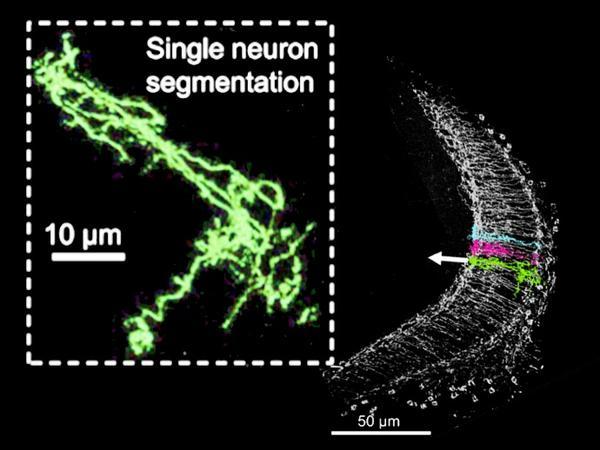 Image of a single neuron of a fruit fly’s eye made with super-resolution microscopy. 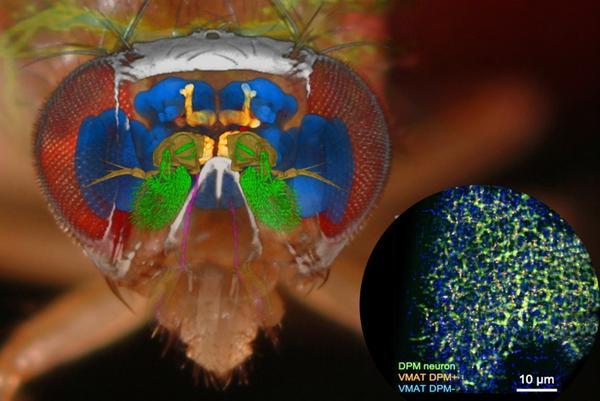 Image of monoamine protein distribution made with super-resolution microscopy.