2020.05.08
On May 9 NTHU entered into an agreement to jointly establish the Taipei School of Economics and Political Science (TSE) together with the TSE Foundation, which was set up with a NT$3 billion (US$100 million) donation from entrepreneur Lin Chen-hai, the founder of the Pau Jar Group. The mission of the TSE will be to provide world-class education in economics, international politics, and public affairs, with Asia as the center of gravity, and will soon begin recruiting top-notch faculty from around the world.
At the signing ceremony, TSE Foundation chairman Huang Huang-hsiung said that the TSE will be located on the NTHU campus, and that this type of cooperation between the public and private sectors is a first in the history of higher education in Taiwan.
Also present at the ceremony was Minister of Education Pan Wen-chung, who said that the establishment of the TSE is undoubtedly a new milestone for higher education in Taiwan, adding that in recent years NTHU has set up a number of innovative admissions channels, including the Rising Star program, the Rising Sun program, and the Special Admissions Program. Pan also pointed out that the merger of National Hsinchu University of Education (NHCUE) with NTHU has resulted in the addition of the College of Education and the College of Arts, and that the establishment of the TSE will provide further impetus to Tsinghua’s emerging role as a leading university in both technology and the social sciences.
President Hocheng Hong said that the plan for establishing the TSE has already been approved by the Ministry of Education, and that it will soon begin recruiting master’s and doctoral students for the 2021-22 school year, two thirds of whom will be international students, adding that all courses will be taught in English, and that the School’s diplomas will be issued by NTHU.
Chairman Huang said that the TSE aims at attracting outstanding students and world-class faculty, for which purpose he is helping to set up an international advisory committee which will solicit expert opinions, and that plans are underway for arranging academic exchanges with such well-known institutions as the London School of Economics and Political Science and the Harvard Kennedy School.
President Hocheng Hong said that public-private cooperation in education on such a scale is unprecedented in the history of higher education in Taiwan, pointing out that Lin’s NT$3 billion donation to the TSE Foundation is the largest ever made in the field of social science education in Taiwan. He said that the TSE combines the prestige of the public sector with the flexibility and resources of the private sector, making it the first of its kind in Taiwan, and extremely rare in Asia, such that its success will surely attract international attention.
Hocheng asserted that technology is a major factor in all of the most pressing challenges facing humanity, such as food security, environmental pollution, energy, war, and even epidemics, and that any viable solution must take account of technological, political, and economic factors, adding that this was one of the principle motivations for establishing the TSE at NTHU.
Hocheng said that the TSE will be the eleventh college at NTHU, and that its multi-disciplinary master’s and doctoral programs will be modeled on those of the London School of Economics and Political Science. The TSE plans to admit at least ten master’s students for the 2021-22 school year, and in the following school year at least 40 master’s students and ten doctoral students, after which enrollment numbers will gradually increase year by year. During the initial phase, TSE classes will be held in the Innovation Incubation Building on the NTHU campus, until the program’s own building is completed on campus. NTHU’s Yuehan Hall on Jinhua Street in Taipei City will serve as the headquarters of the planning committee, and will eventually serve as an additional venue for the program’s classes.
Lin’s son, Pau Jar Group vice chairman Lin Chia-hung, said that his father has always given much importance to education, and thus decided to assist Huang, who initiated the TSE project. The elder Lin’s donation of NT$3 billion will be used to establish a fund, the interest generated will provide about NT$100 million each year to be used as operating expenditure for the TSE. 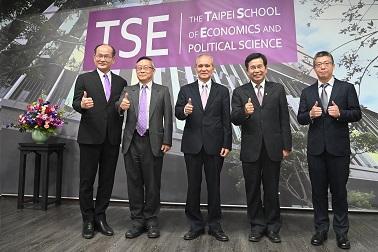