2020.09.16
A research team led by Prof. Wu Jyh-ming of the Department of Materials Science and Engineering has recently developed two composite piezoelectric materials extracted from common waste products. One is a new type of catalyst extracted from discarded rice husks, and is capable of treating industrial wastewater 90 times faster than the photocatalysts now in use. The other is a material extracted from discarded squid bones, and has been used to produce a self-sanitizing transparent film suitable for use as a cover on mobile phone screens, elevator buttons, door handles, etc.
Organic industrial wastewater is typically treated by using photocatalysts; but conventional photocatalysts require sufficient light, and wastewater is usually not very transparent, so the efficiency tends to be rather low. With this problem in mind, Wu’s research team extracted silicon dioxide from rice husks, then added molybdenum and sulfur. The result is a quartz composite material which can be injected into a factory’s wastewater pipeline, wherein the pressure generated by the water flow purifies the pollution without needing any light.
This new type of quartz composite piezoelectric material can also cope with the difficult-to-treat dyes present in the waste water produced by textile factories. Prof. Wu demonstrated this by pouring some quartz powder into a beaker of water colored with various dyes, mixing it in by gently agitating the beaker; within a few minutes, the water is clear and transparent.
Wu explained that what makes this new material so effective is the addition of molybdenum and sulfur during the production process, such that pieces of molybdenum disulfide grow on the quartz rod, which takes on the appearance of a mace, thereby increasing the contact area between the material and the sewage, and making the treatment more efficient.
Wu emphasized that in addition to wastewater treatment, this material can also be used to produce hydrogen, which can be collected and used to produce energy; in addition, piezoelectric materials are reusable and biodegradable, providing a type of wastewater treatment which is cheap, convenient, effective, and environmentally friendly.
The research team’s work has recently been featured in the top international journals Advanced MaterialsAdvanced Materials and AdvanAdvanced Functional Materialsced Functional Materials, and their quartz composite material has already received patents in Taiwan and the United States.
Wu was born in a farming village of Fangyuan in Changhua County, where he grew up assisting his father in the rice fields. The rice husks were fed to the chickens or pressed into panels, but Wu always wondered if they might somehow be put to better use. After becoming a researcher in materials science, he began using large quantities of rice husks in his experiments, and one day, realizing that 200-300 grams of silica can be extracted from each kilogram of rice husks, he wondered if they could be used to make a new type of piezoelectric material. Wu’s latest discovery was especially welcome to Wu’s 82-year-old father, who still works in the rice fields on a daily basis.
Wu’s research team has also succeeded in extracting chitin from squid bones, and using it to produce a new composite piezoelectric material which can be made into a transparent film that can self-sterilization whenever it’s touched, making it highly suitable as a screen cover for various items in public places, such as automated ticketing machines.
She said that the chitin used to make this new piezoelectric material can also be extracted from shrimp shells, crab shells, and cuttlefish bones, and that it can also be manufactured using bionic technology. This transparent film is well suited for screens that can be damaged by spraying alcohol, such as those used on mobile phones.
When Ho’s family learned about her work in the lab, they decided to help out by regularly making various types of dishes featuring squid, and providing her with all the transparent bones. As a result, every time she visits her family, her mother gives her a big bag of squid bones to take back to the lab.
Comparison of new composite piezoelectric material and traditional photocatalysts 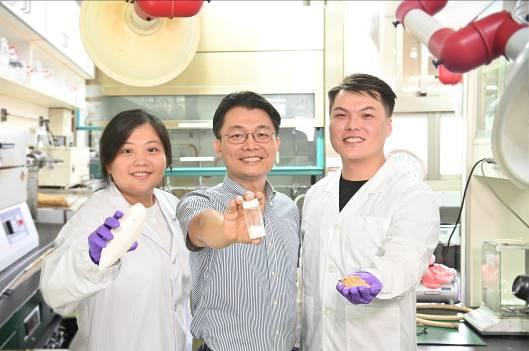 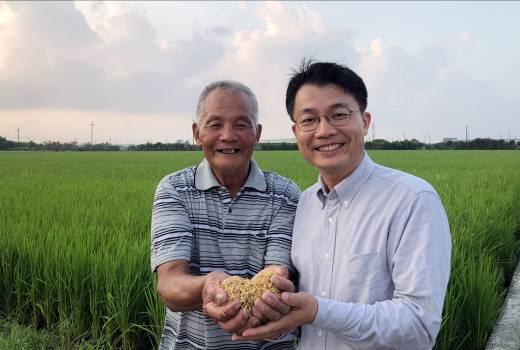 Wu (right) with his father in the paddy fields. 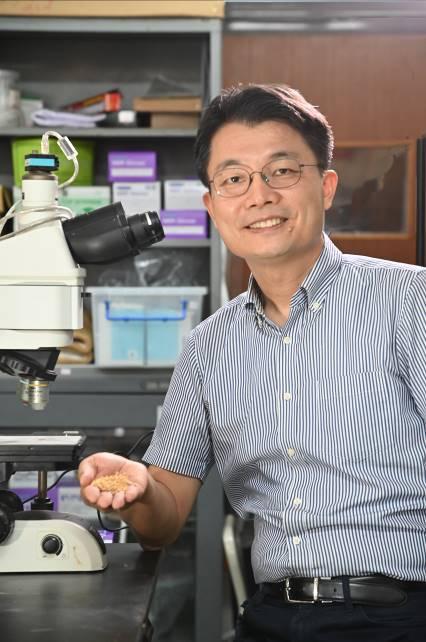 Wu in the lab with a handful of the rice husks.

Ho holding up a mobile phone with a self-sanitizing cover produced from a material made by extracting chitin from squid bones. 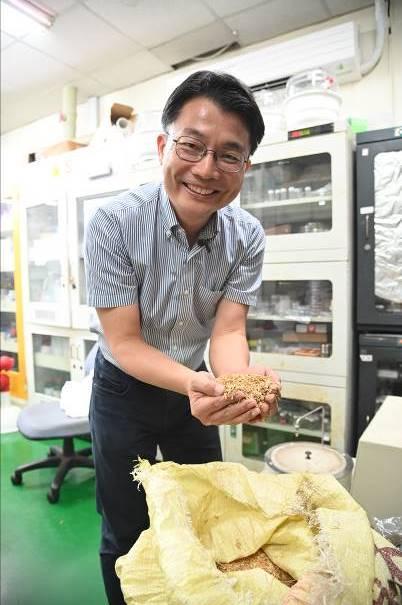 Wu in the lab scooping up some rice husks.