2020.07.29
Professor Li Chia-wei of the Department of Life Sciences has recently implemented a plan to protect Taiwan’s endangered frog species. As part of the plan, NTHU has recently become the nation’s first university with a “frog house,” built with exclusive sponsorship provided by the president of Alumini Association, Mr. Tsai Jinbu.
Prof. Li said that nearly half of the frog species worldwide are threatened with extinction due to pollution and loss of habitat. Despite the ongoing efforts of a well-funded international program for frog conservation, since 1980 more than 120 species of frogs have gone extinct worldwide.
Li said that there are 36 species of frogs native to Taiwan, 14 of which are endemic. NTHU’s Frog House project plans to include all 36 native species, beginning with Moltrecht’s green tree frog (Rhacophorus Rhacophorus moltrechtimoltrechti), which is endemic to Taiwan.
At the opening ceremony for the Frog House, Li said that it currently has 12 tanks and about 200 frogs. The second Frog House will have enough space for about 5,000 frogs and will propagate tadpoles for reintroduction into the natural environment.
Tsai Jinbu, President of Alumni Association said that it was last year when he learned about Prof. Li’s plan to establish the Frog House at Tsinghua, whereupon he immediately offered to cover all the expenses, with full confidence that Li would do a good job.
Tsai also said that Prof. Li has been actively involved in plant and animal conservation for a long time, such that “In just six months the Frog House is up and running, and the best is yet to come!”
Li said that the only other frog conservation program currently operating in Taiwan is the one at the Taipei Zoo, and that is where he learned the basics of frog conservation, including how to design frog tanks and how to raise frogs. In addition, the Taipei Zoo provided the Frog House with three species of South American poison dart frogs, which have already successfully reproduced.
In addition to the South American poison dart frog and the Moltrecht’s green tree frog, the Frog House also currently hosts such native species as the Swinhoe's brown frog (OdorranaOdorrana swinhoanaswinhoana) and the brown tree frog (BuergeriaBuergeria robustarobusta); moreover, there are plans to add a number of protected species, including the Taipei grass frog (HylaranaHylarana taipehensistaipehensis) and the emerald tree frog (ZhangixalusZhangixalus prasinatusprasinatus).
In addition to a tank which simulates their natural habitat, each species is provided with the type of food it normally eats. This is the job of Su Pei-chi, a research assistant of the Institute of Molecular and Cellular Biology, who feeds the frogs and turns on the sprinkler system to moisten the tanks at regular intervals.
Su feeds the poison dart frogs with flightless fruit flies fortified with powdered calcium and vitamins. She explains that poison dart frogs are too slow to catch flying insects, whereas the Moltrecht’s green tree frog is quick enough to catch fast-moving crickets.
Hsieh Hsinyi of the Conservation Research Center at the Taipei Zoo said that the Zoo’s cooperative relationship with NTHU goes back to 2015, when the Zoo, NTHU’s College of Life Science, and the Cecelia Koo Botanic Conservation Center signed a letter of intent for conservation cooperation.
Hsieh said that when the Taipei Zoo set up a pangolin pavilion last year, Tsinghua teamed up with the Cecelia Koo Botanic Conservation Center in providing about 2,400 plants belonging to more than 300 species to simulate the habitat of a tropical rainforest, adding that the Zoo is looking forward to increasing cooperation with Tsinghua in the future. 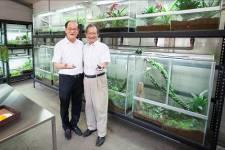 Prof. Li Chia-wei (right) of the Department of Life Sciences at the Frog House, set up with generous support from Alumni Association president Tsai Jinbu (left). 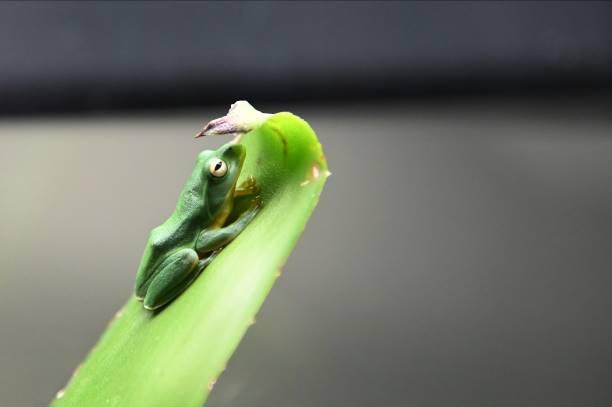 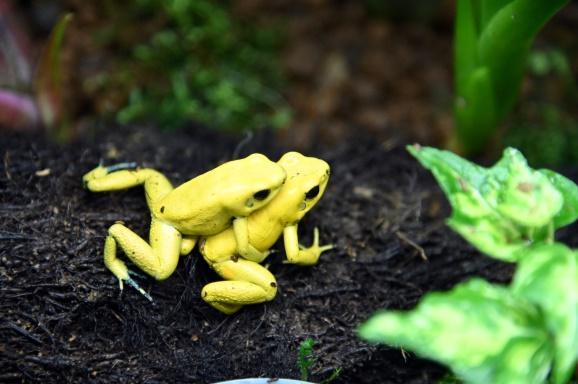 The South American poison dart frogs at the Frog House have already reproduced. 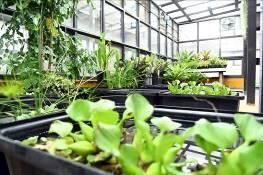 The second Frog House will also propagate tadpoles for reintroduction into the natural environment.