2020.11.05
The Tsing Hua Effects 2020—Technology Art Festival kicked off on November 5. This year's festival features 48 works of art provided by NTHU's Research Center for Technology and Art. Combining such elements as electricity, magnetism, light, water, vision, sound, mechanics, and chemistry, each item in this diverse lineup of educational artwork stimulates the curiosity of young and old alike.
College of Arts dean Hsu Su-chu(許素朱) said that in recent years NTHU has been conducting various types of educational outreach programs in the rural areas of Hsinchu County, including an innovative pilot program in science education at the Shakeng Elementary School.
The theme of Tsing Hua Effects 2020 is “STEM with A,” i.e., STEM (science, technology, engineering, mathematics) plus art, or STEAM. The exhibition lasts for 3 weeks and concluded on November 22.
The exhibition was officially opened by President Hocheng and other attendees by pressing the button on the entry Dancing Water VortexDancing Water Vortex, setting in motion three whirlpools of water dancing inside transparent circular tubes.
President Hocheng said that the purpose of the Festival is to create a synergistic effect by combining art and science, thereby breathing new life into higher education at NTHU and beyond.
Amongst the special guests at the opening event was Lee Yu-chuan, deputy director of the Department of Teacher Training and Art Education at the Ministry of Education. She said that combining technology and art increases students’ competitiveness while also meeting human needs, adding that she is pleased to see that NTHU has extended the scope of its teacher training to primary and secondary schools, and that doing so has been a boon for the nation’s ongoing efforts to promote multiple areas of expertise amongst students.
On the first floor of the busy Main Library (Macronix Building) can be seen Word WoodsWord Woods, a piece of interactive art consisting of a large white panel with black lines of conductive ink which make strange sounds when two are touched at the same time.
In the quiet study area of the Library is WonderlandWonderland, consisting of a set of large bottles filled with a transparent liquid which turns purple-red whenever somebody approaches it. The liquid inside the bottles is a toluene solution, which changes color due to an ultraviolet light triggered by a motion sensor.
The main exhibition area, dubbed the STEAM Interactive Exploration Hall, is on the first floor of the Education Building, and includes 23 pieces of interactive art created by the Research Center for Technology and Art. Amongst these is The Wondrous Golden AngleThe Wondrous Golden Angle, which uses the golden angle principle of mathematics and the optical illusion known as “persistence of vision” to make a 3D printed flower appear to come alive and bloom. Also on display is Magic EllipsisMagic Ellipsis, a board with a hole into which a ball rolls after being set in motion from any starting place, which inspired one elementary school student to imagine a tennis training court with a similar design, obviating the need to continuously collect stray tennis balls.
As part of its ongoing efforts to use art to promote science education, NTHU has recently teamed up with the Taipei City Department of Education’s Excellence in Art education program to establish the Science through Art Competition. More than 30 groups of elementary school teachers entered the competition, and the ten finalists are featured in the STEAM Interactive Exploration Hall.
The three winners of the Competition were announced at the opening ceremony, with the first prize going to Taipei City Fude Elementary School teacher Lin Mengfong(林孟峰) for his entry ColorColoreded Rubik's Cube Rubik's Cube, which demonstrates basic optical principles by exhibiting various colors when viewed from different angles.
Dean Hsu said that interdisciplinary education needs to start at an early age, and that one of the main goals of the Festival is to expose children to various principles in science and math, so that they are more receptive to them when they begin to study them in class later on.
The volunteers for this year’s Festival were mainly members of NTHU’s Science Service Club and Happy Kids Club, who introduced the children to the various entries and also gained valuable experience for creating their own entries for future Festivals. 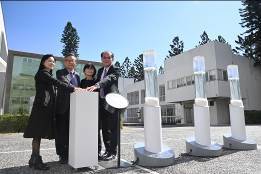 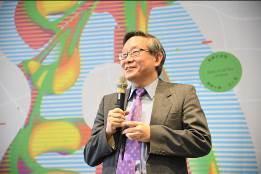 President Hocheng said that the purpose of the Festival is to create a synergistic effect by combining art and science. 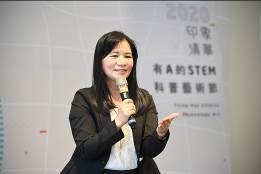 Deputy Director Lee said that she is pleased to see that NTHU has extended the scope of its teacher training to primary and secondary schools. students. 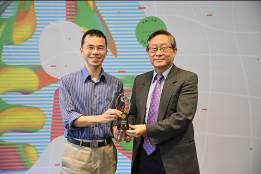 President Hocheng (right) conferring the first prize in the Science through Art Competition to Lin Mengfeng, a teacher at the Fude Elementary School, Taipei. 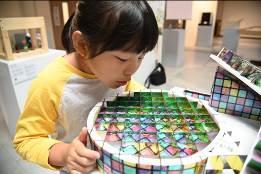 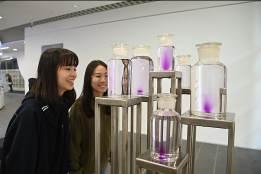 Wonderland consists of a set of large bottles filled with a transparent toluene solution which turns purple-red whenever somebody approaches it. 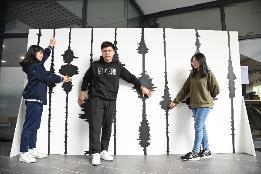 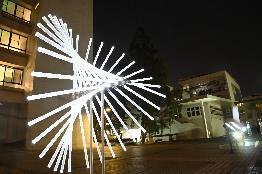 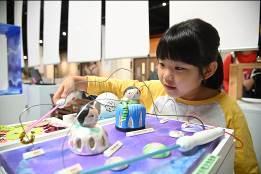 Young visitor playing with a piece of interactive art titled Happiness Is a Two-way Circuit. 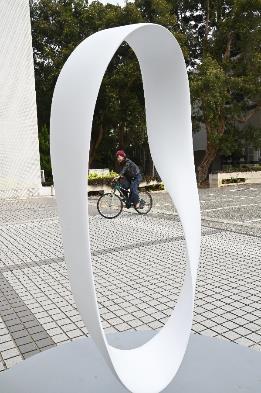 Located on the plaza between General Buildings II and III, Möbius Strip is based on the mathematical principle known as topology.