Providing a Refuge for Endangered Ferns

2020.12.08
NTHU now has a dedicated fern garden. Established under the direction of Professor Li Chia-wei(李家維) of the Department of Life Sciences, the Fern Garden hosts nearly 100 rare fern species, including Pteris wulaiensis and Adiantum capillus-junonis all of which were transplanted from the Cecelia Koo Botanic Conservation Center in Pingdong County. In addition to supporting teaching and research in plant ecology, the Fern Garden will also help in preserving endangered fern species.
Located next to the Main Library, behind the replica of Rodin's statue TThe Thinkerhe Thinker, the Fern Garden is protected by a glass wall allowing a full view of the Garden from the adjacent footpath.
Li had his student Chou Chiao-chi(周巧其), a dual major in biology and art, set up a fog machine to provide the ferns with extra moisture, creating a dreamy scene reminiscent of a primeval forest, especially attractive at night.
President Hocheng Hong said that in recent years NTHU has been making a concerted effort to implement the sustainable development goals of the United Nations, adding that, even though ferns are not as flashy as flowering plants and may not have the economic value of seed plants, they are still important indicators of ecological vitality and environmental sustainability. Moreover, the sight of such a huge variety of ferns thriving in a relatively small space is a big relief for eyes wearied by the havoc brought on by the covid-19 pandemic.
Li explained that ferns are flowerless and seedless, so they reproduce by producing spores. They were once one of the most important plant groups in the earth’s terrestrial ecosystem, around the time of the dinosaurs, but now they live humbly in the shadows of big trees, and many of them are threatened with extinction.
Li said that about 12,000 fern species have been discovered worldwide, including about 400 species in North America, about 700 species in Japan, and more than 820 species in Taiwan, making this 36,000 square kilometer island a veritable paradise for ferns. However, about 30% of the fern species on the island are threatened with extinction, including several critically endangered species endemic to Taiwan.
In determining which species would be best suited for the Fern Garden, Li was assisted by Chen Chun-ming（陳俊銘） of the Cecelia Koo Botanic Conservation Center. Chen shipped the ferns from Pingdong to NTHU in two batches, one in October and one in November, both inside a trailer which maintains a fixed temperature. About 60 species have already arrived, and another 40 species are on the way.
Li explained that most of the ferns in the Fern Garden are native to Taiwan, including Pteris Pteris wulaiensiswulaiensis, Pteris Pteris angustipinnaangustipinna, Adiantum Adiantum capillus-junoniscapillus-junonis, and Adiantum Adiantum meishanianummeishanianum. He said that Pteris Pteris wulaiensiswulaiensis is found in small clusters in which less than 50 members reach reproductive maturity. Adiantum Adiantum capillus-junoniscapillus-junonis grows in Nantou County and the area bisected by the Southern Cross-island Highway, built and maintained with large amounts of sprayed concrete, the use of which has reduced its natural habitat.
Chen used stipules to cultivate more than 100 critically endangered AngiopterisAngiopteris itoiitoi, one of which has been planted in the Fern Garden. In addition to fern species native to Taiwan, the Fern Garden also hosts a number of rare imported species, such as CalciphilopterisCalciphilopteris alleniaealleniae.
Li decide to locate the Fern Garden in a busy part of campus so as to raise awareness of the importance of biodiversity and habitat conservation. Moreover, the mature pine trees dotting the site provide an ideal mix of shade and light, making it suitable for a wide range of fern species.
Li had glass artist Chang Ching-yao(張清耀) engrave on the surrounding glass wall images of how fern leaves, sporangia, and spores look under a microscope, making it both informative and attractive.
In addition to the Cecelia Koo Botanic Conservation Center, the Fern Garden received generous assistance from the Ministry of Science and Technology as well as private donors. Funds for the ongoing maintenance of the Fern Garden will be provided by Charles Hsu（徐清祥）, founder and chairman of eMemory Technology.
As part of the Fern Garden’s educational mission, guided tours will be held. The tours are being organized by Sun Tzuyun（孫梓云）, a sophomore of the Department of Life Sciences also a member of the Youth Council at the National Palace Museum. 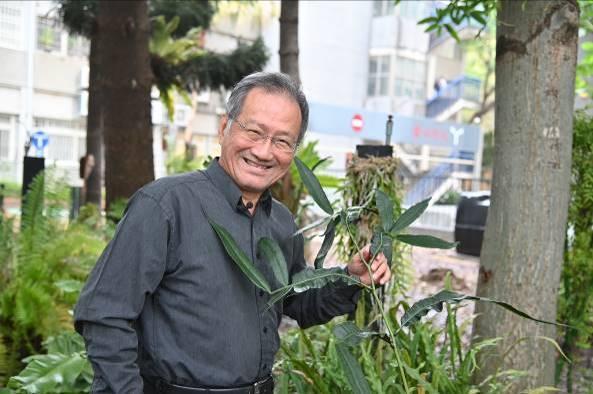 Professor Li Chia-wei(李家維) of the Department of Life Sciences has recently established the Fern Garden next to the Main Library. 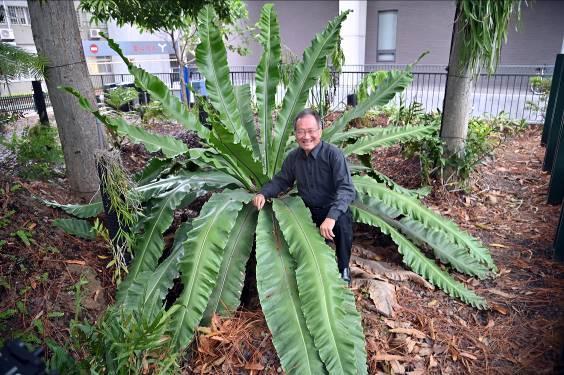 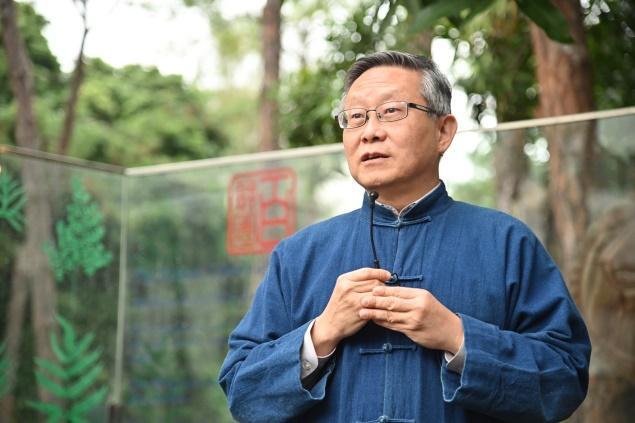 President Hocheng said that the Fern Garden has the highest concentration of ferns in all Taiwan. 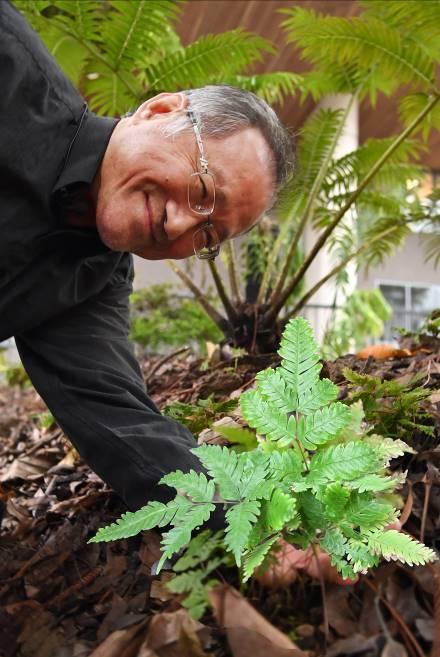 Amongst the nearly 100 fern species is Pteris wulaiensis, which is endemic to Taiwan. 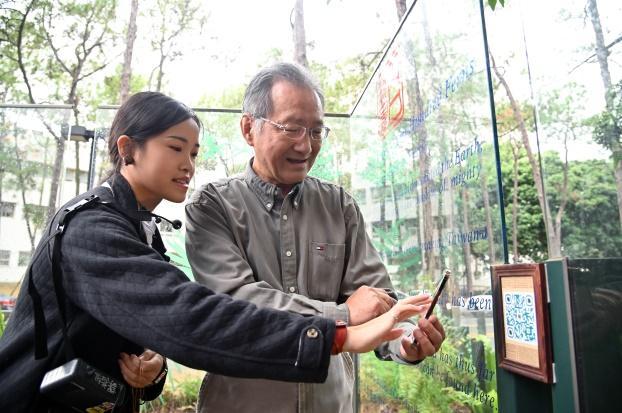 Scanning the QR code outside the garden brings up information on a variety of rare ferns. 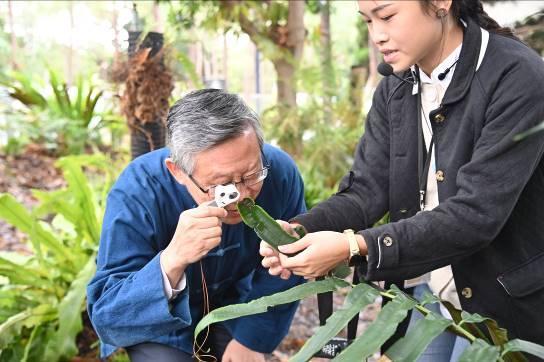 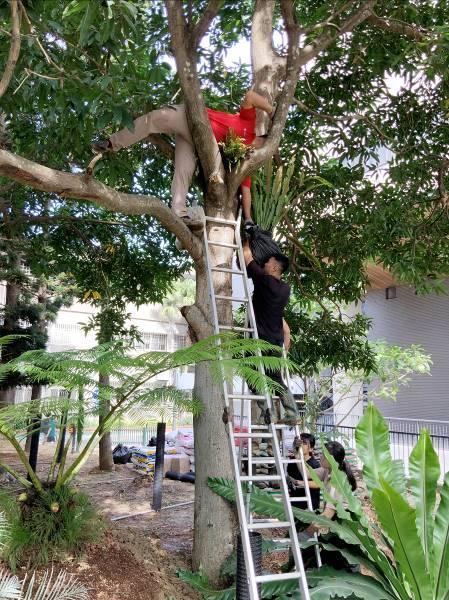 Attaching sun-loving ferns to a tree. 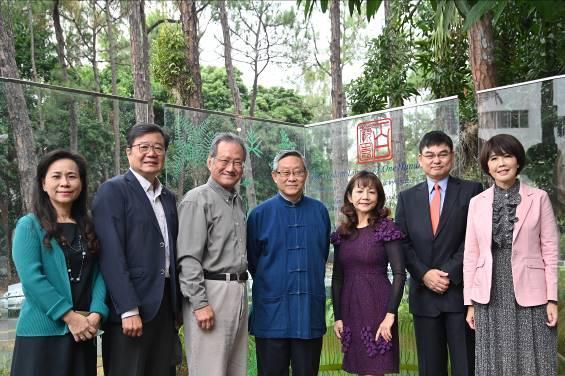 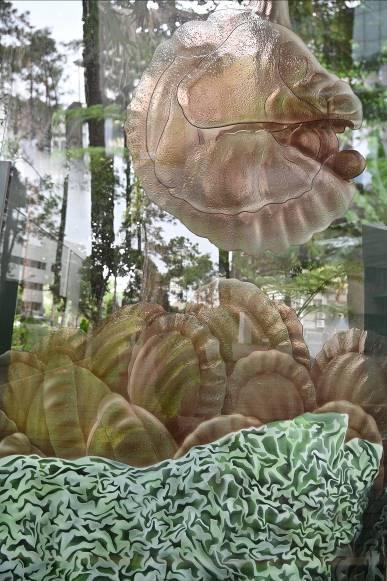 Engraved on the surrounding glass wall are images of how fern leaves, sporangia, and spores look under a microscope.