2022.03.30
On March 30, NTHU held the opening ceremony for the Post-baccalaureate Program in Medicine, during which NTHU president Hocheng Hong said that the new program will train students to meet the challenges of tomorrow by focusing on the ABCs of the medical science of the future, viz., Artificial intelligence (AI), Big data, and the Cloud-based internet of things.
President Hocheng pointed out that the combination of medicine and new technology is the wave of the future. He further noted that NTHU’s firm commitment to the ABCs of medicine, coupled with the NTHU Hospital to be built at the Taoyuan Aerotropolis, will provide students with a comprehensive education in primary medical care.
Hsinchu County magistrate Yang Wen-ke said that the Hsinchu Science Park was established 42 years ago, and that last year it had an output production value of NT$1.58 trillion. Pointing out that NTHU has played a vital role in the Park’s success, he asserted that right now is the optimal time for launching a program focusing on precision medicine and AI medical care.
The Post-baccalaureate Program in Medicine belongs to the College of Life Science, the dean of which is Kao Ruey-ho. Dean Kao said that the first batch of students will include twenty-three publicly-funded students, sixteen of which will be based in the Natural Science Group, and seven in the Information Technology Group.
Dean Kao also mentioned that the Program has already appointed over 100 full-time and joint-appointment faculty members, and that all the required facilities will soon be ready for use, including a dissection room with nine dissection tables.
The Program's curriculum conforms to international standards. Dean Kao observed that departments of medicine in Taiwan traditionally divide the curriculum into independent subjects, such as physiology, pharmacology, pathology, cardiology, nephrology, and urology. By contrast, NTHU's Program takes more of a systems approach, in which basic and clinical courses are combined, as in the course on the cardiovascular system which integrates such related areas as pharmacology.
Formerly the director of the Tzu Chi Hospital in Hualian, Dean Kao said that by enrolling students with backgrounds in electrical engineering, computer science, materials science, and chemical engineering, the Program will increase the diversity of medical education in Taiwan, while also providing the nation with pioneering physicians to meet the needs of the future.
The director of the Program will be Chou Hung-hsueh, formerly the director of the Department of Medicine at Chang Gung University. Director Zhou said that he expects his students in the Program to have a strong sense of mission, and to be willing to work in areas of Taiwan which lack adequate medical facilities. He also pointed out that the curriculum includes coursework in the medical humanities, focusing on the role of public-funded physicians, so as to “turn out doctors who know how to care for their patients in a holistic manner.” 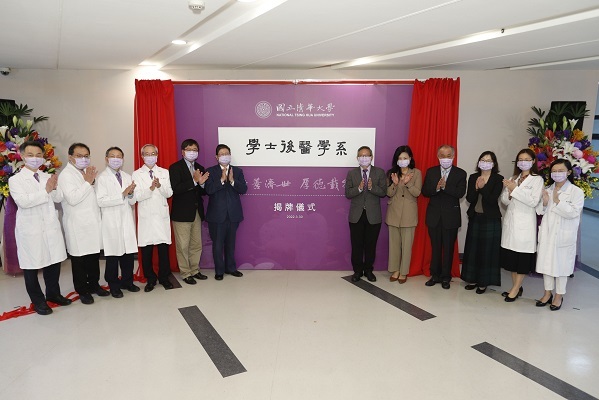