2020.11.03
A research team led by Professor Wang Wen-ching of the Institute of Molecular and Cellular Biology, National Tsing Hua University (NTHU) has exploited the power of big data to identify two key biomarkers contributing to the proliferation and metastasis of gastric (stomach) cancer. Using the US Food and Drug Administration (FDA)-approved drugs, the team conducted targeted therapy which can effectively eliminate tumor growth and inhibit metastasis, paving the way for a new tailored therapy. Their research has been published in the newest issue of Proceedings of the National Academy of Sciences of the United States.
Finding new ways to treat gastric cancer
Stomach cancer is the fifth most common cancer worldwide, and the second highest mortality rate because of its grueling and difficult treatment for many patients. Wang said that it often happens that by the time someone is diagnosed, cancer cells have already metastasized.
Wang said that there is, thus far, only one target drug (Her 2 therapy) that can treat gastric cancer, and it is only suitable for less than 20% of patients worldwide. In Taiwan, this number drops to 8% . Wang's team has been working on to unravel the mechanism underlying the spread of cancer cells and finding new biomarkers, with a goal of developing a new tailored therapy.
Putting the brakes on stomach cancer
Wang explained that the major reason for the spread of gastric cancer cells is the ineffectiveness of the protein phosphatase and tensin homolog (PTEN), the tumor suppressor protein which acts like a brake. When the brake fails, cancer cells will proliferate, expand, and grow into dangerous metastatic tumors. The team’s first task was to determine the basis of this “brake failure.”
The research team collected information from over 300 cases of gastric cancer and used big data to derive the biological pathway that lead to cancer progression from more than 30,000 potential genes. They uncovered that the two enzymes PHF8 and PKCα play a key role in the enigma. The nuclear enzyme PHF8 is prevalent in ~40% of gastric cancer tissue and causes PKCα to surge, triggering the loss of PTEN, like “a brake failure”.
Fortunately, PKCα activity can be inhibited by the drug midostaurin, an anti-cancer agent for the treatment of blood cancer approved by the US Food and Drug Administration three years ago. The team used zebrafish and mice models to provide the proof-of-evidence that midostaurin treatment can shrink tumors and curb further spread of the cancer.
Wang said that the breakthrough in the search for a precision therapy is through interdisciplinary collaboration. She is grateful to Dr. Tseng Linlu, who just earned her PhD with solid training in molecular medicine and biostatistics at NTHU, Dr. Yeh Ta-sen, the director of the Division of General Surgery at the Chang Gung Memorial Hospital in Linkou, Dr. Yuh Chiou-hwa at the National Health Research Institute and Academia Sinica fellow Kung Hsing-jien. 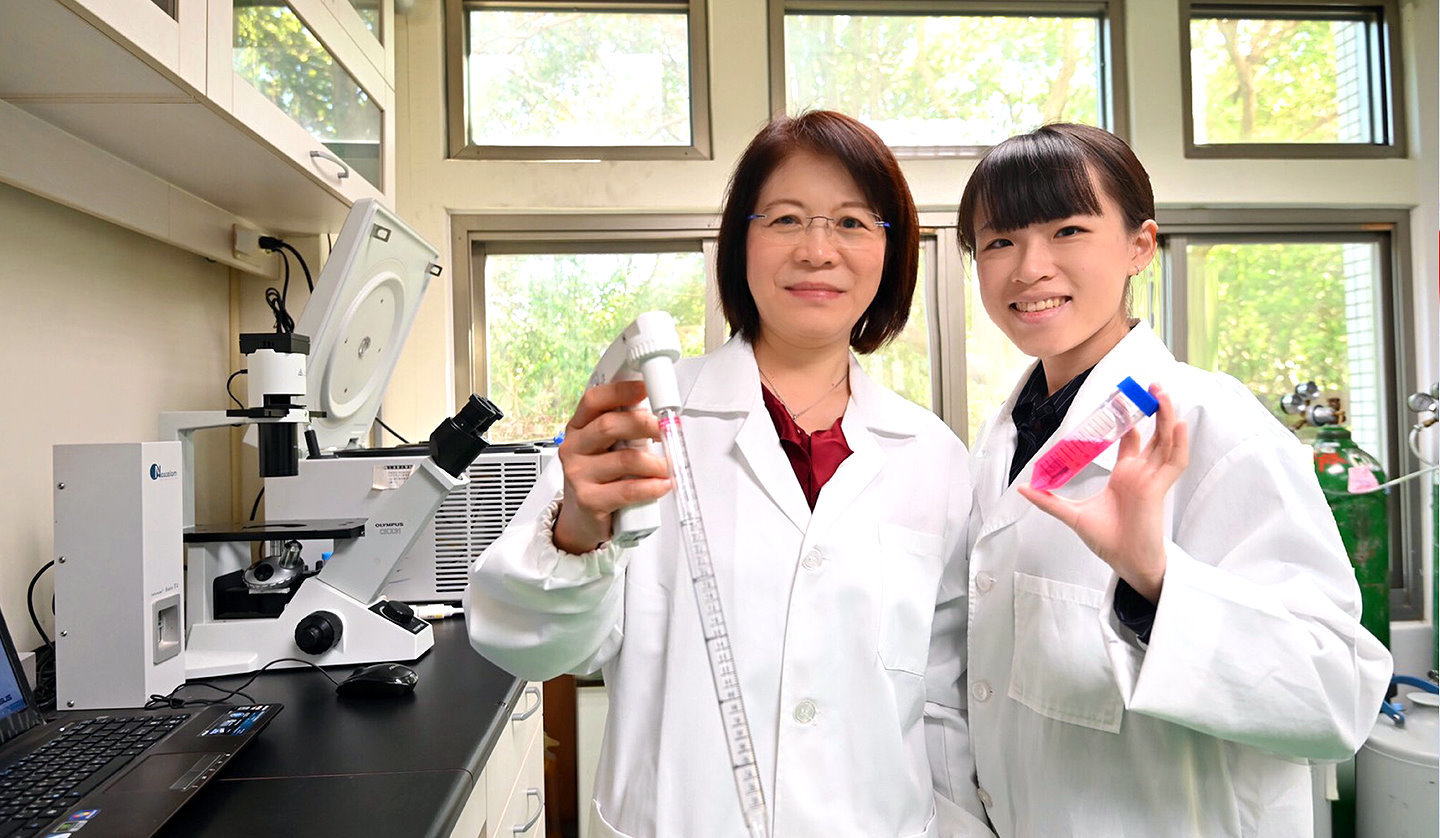 Professor Wang Wen-ching (left) of the Institute of Molecular and Cellular Biology and Dr. Tseng Linlu researching a new treatment for gastric cancer.