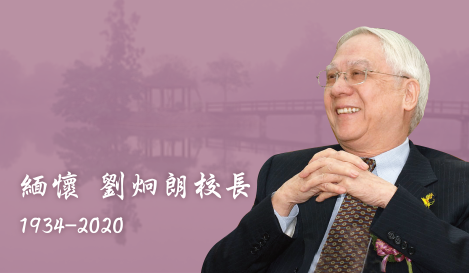 Former NTHU president Liu Chung-laung passed away on November 7, sending a wave of grief across the entire campus.

In 1998 Liu gave up his American citizenship and became the eleventh president of NTHU. Widely respected for his keen judgement and friendly leadership style, during his four-year tenure he enhanced Tsinghua’s reputation and facilitated major corporate donations for the construction of several new buildings, including the TSMC Building and the Macronix Building.

After stepping down from the post of president in 2002, Liu continued to teach in the Department of Computer Science, while maintaining an active interest in the school’s ongoing development. In 2006 he joined NTHU’s University Development Advisory Committee, and was planning to attend its meeting scheduled for the end of this year.

Liu’s unassuming manner and friendly smile made him highly popular amongst the student body. In 2005 he began hosting “I Love to Talk and You Love to Laugh,” a lively and thought-provoking weekly radio show.

Liu was also an early proponent and exemplar of interdisciplinary education and research. In fact, for Liu the traditional boundaries between various disciplines were convenient fictions, and one of his favorite adages was “a deep understanding of one field brings an understanding of all fields.”
In accordance with Liu’s wishes, no funeral services will be held. Instead, his family has set up a memorial website for leaving condolences and tributes at: https://clliu19341025.wpcomstaging.com/
visited: