2020.12.23
Tsinghua's athletes performed brilliantly in this year's National Intercollegiate Athletic Games, winning 20 gold medals, 14 silver and 18 bronze medals, setting a new record for the Games and raising NTHU's overall ranking to sixth place amongst the 147 participating colleges and universities. On December 10th NTHU's outstanding athletes were lauded at a special event held at the Tsinghua Hall of Fame. During the event Alumni Association president Tsai Jinbu(蔡進步) presented the award-winning athletes and their coaches with cash prizes.
The music for the event was provided by the clinking of the medals—as many as six—hanging from the athletes’ necks.
President Hocheng said that the large number of shining medals visible at the event bears witness to all the hard work Tsinghua’s athletes have put into their training, thereby strengthening the school’s traditional emphasis on athletics and self-discipline.
Hocheng also said that he hopes to someday see some of the school’s star athletes inducted into the Tsinghua Hall of Fame, which would provide additional inspiration to the school’s future athletes, adding with a smile, “In 2020 we won 20 gold medals, and in 2060 we shall win 60!”
In his speech at the awards event Tsai Jinbu said that he felt honored to be have so many outstanding athletes gathered in place, adding that he may not be a very good athlete himself, but he is a good cheerleader. Once during the Meizhu Tournament, Tsai was seated next to Hocheng and cheering at the top of his lungs, prompting Hocheng to suggest that he might want to join the Cheerleading Squad.
In reply, Tsai promised to advocate for the continuing support of athletics by the Alumni Association, asserting, “For those of us who aren’t great athletes, this is the least we can do.”
The 2020 National Intercollegiate Athletic Games were originally scheduled to start on May 2 at National Kaohsiung University, but were postponed to October 31 due to the pandemic. During the competition, Tsinghua’s athletes came through with flying colors.
Record-breaking performance
Led by coaches Chou Yichen(周宜辰) and Chang Youhua（張祐華）, the Track and Field team won 8 gold medals, 4 silver medals, and 6 bronze medals. The women's team won the first place trophy and the men’s team won the second place trophy. Amongst the team’s 8 gold medals were one in the men’s/women's 100-meter dash, one in the women's 400-meter hurdles, one in the women’s 400-meter relay, and one in the men’s shot put.
Kuo Bochen（郭柏辰）, a junior in the Department of Electrical Engineering, took first place in the men's javelin and shot put competitions, while setting a new record in the shot put competition. Kuo said that he spent almost all his spare time on training, and that he really enjoys it.
Kuo said that even he was surprised by his record-setting performance, and that he is grateful to his teammates, Chou, and Tsai for all their encouragement.
The Swimming Team won 5 gold medals, 7 silver medals, and 8 bronze medals. Team member Wang Hao, a senior in the Department of Sports Science, won gold medals in the 100-meter freestyle, the 200-meter freestyle, and the 200-meter freestyle relay. He said that he was impressed with the entire team’s performance.
A new team at the top
The women’s Table Tennis team participated in the women’s open for the first time this year, pulling off a dramatic comeback in the finals, and ultimately winning the gold medal, in the process ending the 11-year winning streak of the team from the Chinese Culture University.
Team coach Wu Techeng(吳德成) said that this year Tsinghua’s sports teams “have done the impossible!” attributing their success to two years of intensive training coupled with enthusiatic encouragement.
A new first in archery
Led by Coach Ni Tachih(倪大智), who also heads the national team, the Tsinghua Archery Team beat Chung Cheng University by 6-2 in the women's recurve bow competition to win the gold medal—a new first for Tsinghua.
Department of Sports Science M.A. student and team captain Lin Shichia（林詩嘉） attributed the team’s success to the strong coordination and team spirit amongst all its members.
Lin thanked Coach Ni for his guidance. She said that Ni rushed back to Hsinchu from Kaohsiung every week to lead the training sessions, and that his guidance was indispensable. She also extended a hearty thanks to Tsai Jinbu for all his support and encouragement.
In addition, under the guidance of Hsu Renhao(許仁豪), the Badminton Team won 1 gold medal, 2 silver medals, and 1 bronze medal. Under the guidance of Cheng Weiren（鄭為仁）, the men's Tennis Team won a gold medal in this year's team competition, for the third time in as many years. Finally, the Boxing Team won 2 gold medals and 2 bronze medals, and the men's Kickboxing Team won 1 gold medal.

On December 10th NTHU’s outstanding athletes in this year’s National Intercollegiate Athletic Games were lauded at a special event held at the Tsinghua Hall of Fame. 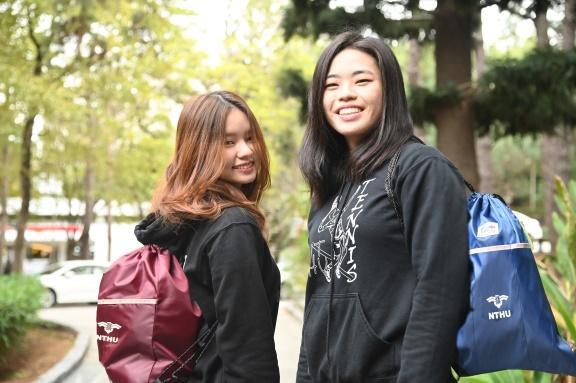 Amongst the prizes given out at the event were these duffle bags. 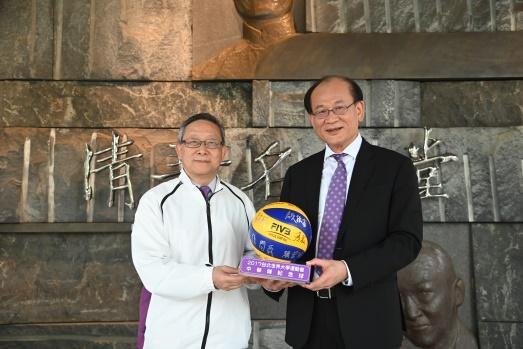 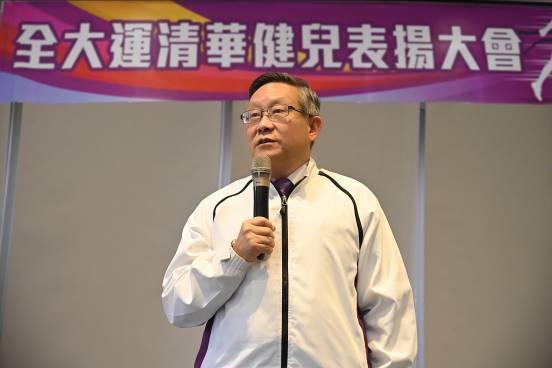