NTHU Researchers Take Robotics to the Next Level

2021.01.14
HSINCHU, Taiwan, although widely used in manufacturing, robots require much more agility for use in nursing and rehabilitation. With this in mind, an interdisciplinary research team led by Professor James Chang of the Department of Power Mechanical Engineering has recently applied the latest advances in AI, biomechanics, and human-factor engineering to develop a robot that can imitate the meticulous movements of a human hand. Endowed with sharp senses of vision and touch, the robot’s hands are nimble enough to catch a ball and pull out a tissue.
Completely designed and manufactured in Taiwan, this dexterous two-handed robot has been dubbed the “Tsing-Hua Gentleman” by NTHU President Hocheng Hong, who said that it’s destined to play a leading role in the field of medical care.
Advanced robotic agility
What makes this robot unique is that one hand provides strength, while the other is highly nimble. Chang said that a nimble hand is required in most work in medical applications, such as in covid-19 test where a hand should be nimble enough to gently operate a cotton swab in-and-out of a person's nostril or throat. Overcoming limitation of six-jointed robotic arms, Chang’s robotic arm has seven joints, enabling agile movements, even in ways that human arm can’t. The robot developed by Chang’s team closely imitates those of the human hand, with level of dexterity reached by digitizing a human hand’s motion, making the robotic hands nimble enough to hold a baby or turn over a bed-ridden patient.
Human-like perception
Chang explained that this nimble hand imitates the design of human fingers, utilizing pneumatic transmission to control its movement with a US-patented precise pressure sensing device that responds to changes of magnetic force. Comparing to robots requiring a separate sensor for each direction, Chang’s robotic hand has only one sensor for multi-direction sensing, making it more like a human hand. With a 3D visual system to scan surrounding objects over a wide range, this robot possesses sense of space and ability to use AI to identify objects.
Inspiration
A Ph.D. from Carnegie Mellon University, USA, Chang previously worked at IBM, specializing in mechatronics and robotics. After returning to Taiwan, he met and collaborated with his primary schoolmate Yu-Cheng Pei, a rehabilitation physician at Chang Gung Memorial Hospital, under support from Ministry of Science and Technology to develop assistive devices for use by patients with impaired hand function.
Chang’s initial impetus for developing this robot came from his wife seeing a robot on TV that could cook food. “I told her it was just an animation, but her request was so earnest that I promised to invent a real robot that really could cook for us,” Chang said with a smile.
Taiwan will become a super-aged society by 2025. Thus, Chang is aiming to develop a robot capable of performing a wide range of services required by the elderly, and, of course, cooking and washing the dishes. 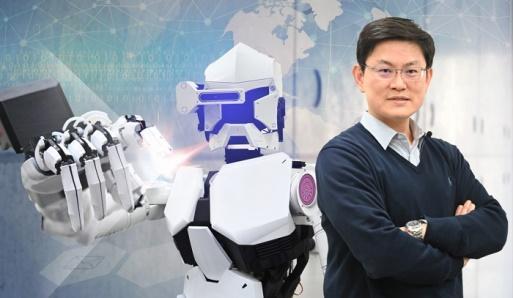 An interdisciplinary research team led by Distinguished Professor James Chang of the Department of Power Mechanical Engineering has recently developed a humanoid robot that imitates the meticulous movements of a human hand.