2021.08.25
HSINCHU, Taiwan. As COVID-19 vaccination has raised the issue of thrombosis, Dr. Chih-Kuang Yeh, Distinguished Professor of the Department of Biomedical Engineering and Environmental Sciences, has led a research team to developed the world's first ultrasonic vortex thrombolytic device and to treat thrombosis quickly and safely. The research has been published in Proceedings of the National Academy of SciencesProceedings of the National Academy of Sciences (PNAS) in 2021. Moreover, U.S. and EU patents are granted, with more applications on the way.
The device is developed to solve two common thrombosis called pulmonary embolism (PE) and deep vein thrombosis (DVT), which have global prevalence of 10 million new cases annually. DVT is the main cause of PE, and PE can cause heart failure and has mortality rate up to 65%. Professor Yeh explained that the current treatment options includes drug delivery catheter and thrombectomy devices, but they are not effective enough or may bring up hemorrhage risks. This was the reason motivating him to research for a more effective and safer solution.
Working with industrial partners, Yeh’s team has developed a 0.2-mm ultrasonic device, which can generate tornado-like ultrasonic vortex and create a strong turbulent around the thrombus, therefore increasing penetration of thrombolytic drugs and resulting in very effective thrombolysis. The residue of the dissolved thrombus is just 0.001 cm.
“I once saw a blood clot that was over 40-cm long. Only using medication to dissolve them is just too slow,” Yeh explained. “It’s like washing clothes. Only soaking the clothes in detergent won’t be enough. Agitation by a washing machine is an essential step to get clothes clean quickly.”
Yeh said that animal studies have shown results of 60% thrombus shrinkage in the mice brain after applying ultrasonic vortex for ten minutes, demonstrating the potential of fast treatment. What’s more, the feedback property of ultrasound can be used for real-time treatment monitoring.
Yeh added that his team is also working on using ultrasonic vortex for noninvasive thrombolysis, which provides potential to treat embolisms in the brain. In addition, while combining with microbubbles for controlled drug release, treatment for neurological disorders such as Parkinson's disease and epilepsy, will become possible.
Reflecting on how he first got interested in ultrasonic vortex, Yeh recalled that it was a family trip to a marine science museum ten years ago. Standing by the waterspout exhibition, he came up with an idea that ultrasonic waves can do similar things and might be useful for some medical applications.
Yeh’s team is named VorteSonic, a combination of vortexvortex and sonicsonic waves waves. Core team members include Ph.D. students Wei-Chen Lo and Zong-Han Hsieh, who are in charge of ultrasonic transducers and the driving system; and Dr. Chun-Yen Lai, who will be leading the team after spinning off a startup from the university. Dr. Lai has experiences in both academia and industry, and was a visiting fellow working on innovative medical devices at Stanford University in the U.S. 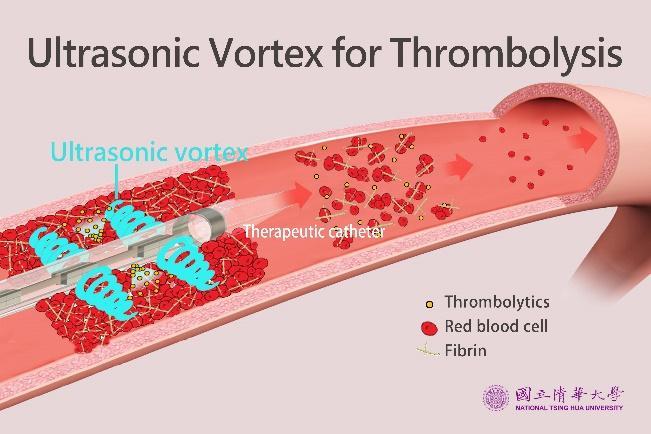