Making Gravitational Waves in Astronomy and Art at NTHU

2022.04.21
The “Tsing Hua Effects 2022—Astronomy and Art Festival,” which opened at the Main Library on April 21, is the first science and technology art exhibition on the theme of astronomy held in Taiwan. The centerpiece of the Festival is an interactive exhibition titled Cosmic Ripples, which makes a variety of astronomical phenomena—gravitational waves, space-time distortion, and the merging of black holes—readily accessible to the general public. The exhibition is open to all, so invite your friends to join you in exploring the mysteries of the universe.
The curator of the exhibition is Professor Albert Kong(江國興) of NTHU’s Institute of Astronomy. He said that the existence of gravitational waves was first predicted in 1916 by Albert Einstein. Based on his general theory of relativity, Einstein surmised that the merger of two massive black holes or stars should generate ripple-like space-time distortions called “gravitational waves.”
However, it wasn’t until 2016 that Einstein was shown to be correct, when gravitational waves were detected for the first time by the Laser Interferometer Gravitational-Wave Observatory (LIGO) in the United States. The three leaders of the thousand-strong international research team won the Nobel Prize in Physics the following year. One of the key components of the apparatus used at LIGO is a coating for high-sensitivity laser mirrors, which was developed by a research team led by Professor Chao Shiuh(趙煦) of NTHU’s Institute of Photonics Technology. The coating reduces thermal noise, making it possible to quickly and accurately detect faint gravitational waves.
Prof. Kong said that in addition to the laser mirror coating developed by the Tsing Hua team, the Festival features a miniaturized interactive replica of the apparatus used at each of LIGO's two observatories to detect gravitational waves. The exhibit was created by the Research Center for Technology and Art at NTHU, and by pressing a button, visitors can see for themselves how gravitational waves are observed.
In addition to learning how gravitational waves are detected, visitors can also hear the “sound of the universe” in the form of a simulation of the sound created when two black holes of different masses merge.
Kenneth Liu(劉士達), the director of the Research Center for Technology and Art, said that additional highlights of the exhibition are a display that uses marbles to simulate planetary orbits, and a cosmic table hockey game, in which a joystick is used to catch an oncoming star and throw it to one’s opponent, with an ink-spewing cosmic squid appearing now and then to make the game more interesting.
In addition to his academic research, Prof. Kong is also dedicated to bringing knowledge of astronomy to the wider public, an effort that received added impetus when NTHU added a College of Arts a few years ago. The exhibition was sponsored by the Science Popularization Program of the Ministry of Science and Technology, and was organized by the Research Center for Technology and Art, with an emphasis on making research findings on gravitational waves accessible to the general public.
NTHU senior vice president Tai Nyan-hwa(戴念華) said that the Astronomy and Art Festival is the latest manifestation of Tsing Hua’s ongoing emphasis on interdisciplinary learning, and he encouraged everyone to come and learn more about this fascinating universe we inhabit.
Deputy Minister Lin Minn-tsong(林敏聰) of the Ministry of Science and Technology said that the Ministry has been giving special emphasis to creative and cross-disciplinary projects in recent years, because solving problems in an ever-changing world requires overcoming the barriers between academic disciplines, adding that this exhibition is a fine example of how to use art and astronomy to “make some creative ripples.”
The “Tsing Hua Effects 2022—Astronomy and Art Festival” was held in the quiet study area on the first floor of the Main Library (Macronix Building); the main exhibition concluded on May 8, while the related exhibits will remain on display until August 31. The Main Library is open Monday to Friday, from 8:00 am to 10:00 pm, and on Saturday and Sunday from 10:00 am to 6:00 pm. For information on the exhibition in Chinese, visit the Festival website at: https://techart.nthu.edu.tw/THE2022/ 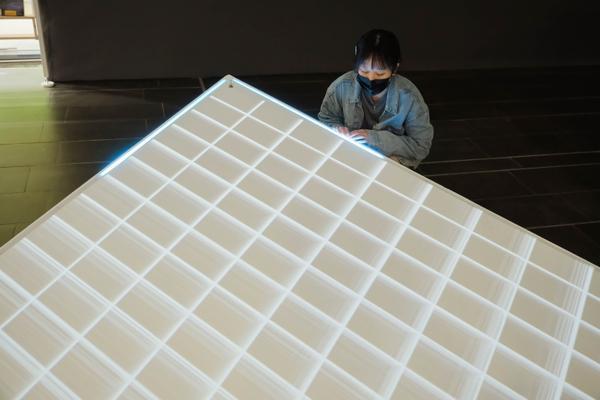 An interactive display created by the Research Center for Technology and Art at NTHU showing how gravitational waves are observed. 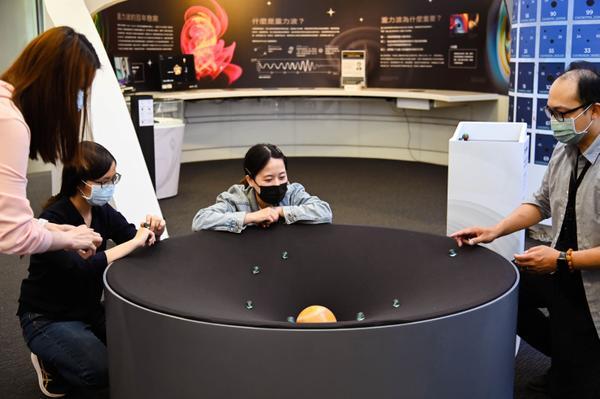 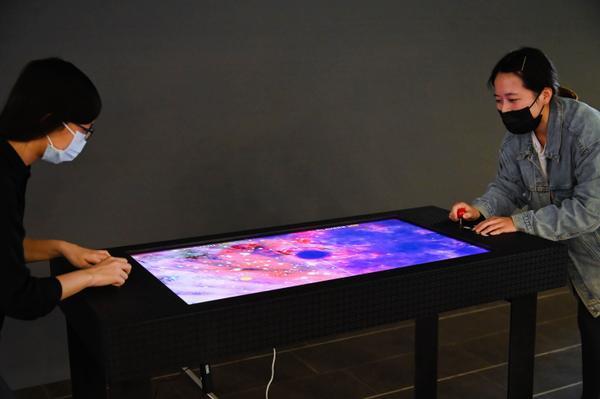 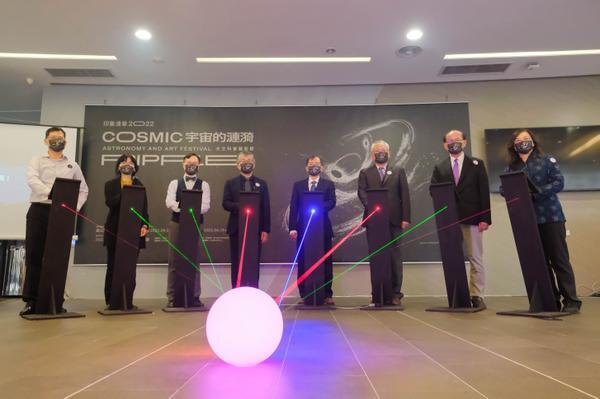 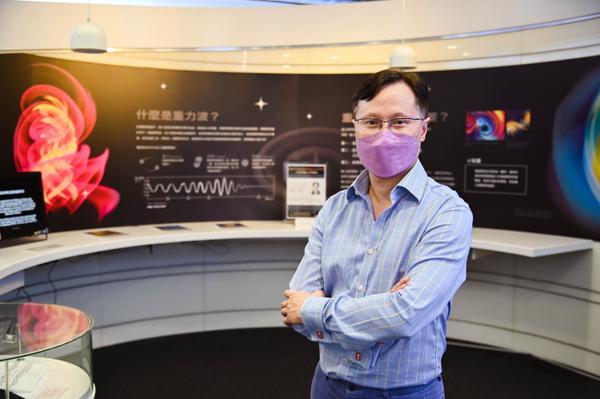 Kong is dedicated to bringing knowledge of astronomy to the wider public. 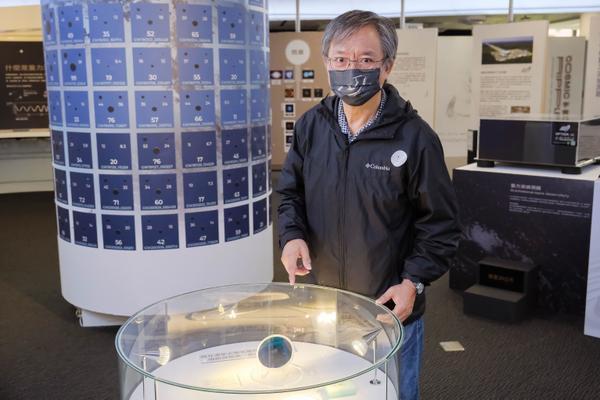 Chao Shiuh of the Institute of Photonics Technology explaining how a special coating developed by his team reduces thermal noise, making it possible to quickly and accurately detect faint gravitational waves. 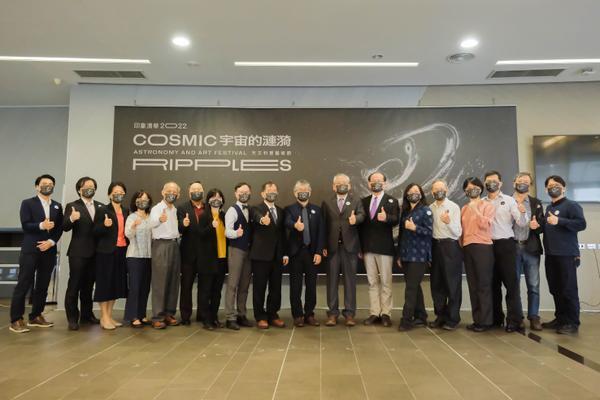 The opening ceremony of the Tsing Hua Effects 2022—Astronomy and Art Festival on April 21. 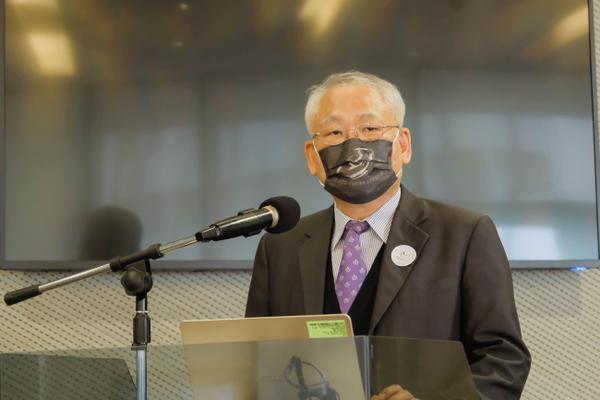 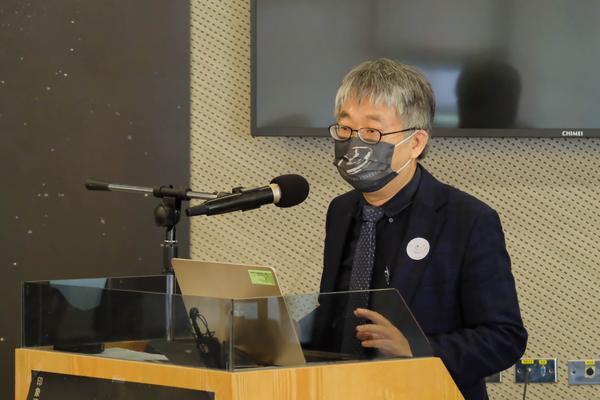 Lin Minn-tsong of the Ministry of Science and Technology said that this Exhibition is a fine example of how to use art and astronomy to “make some creative ripples.”